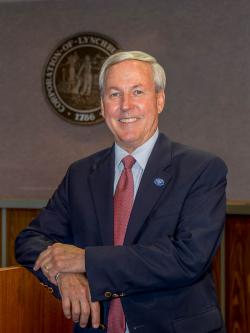 Randy graduated from E.C. Glass High School, Randolph-Macon College in Ashland, and the T.C. Williams School of Law at the University of Richmond. While a law student, he served as a police officer in Virginia Beach, Virginia, as part of the city's Law Student - Police Program.

After 4 years as a college varsity soccer letterman and team MVP, Randy promoted soccer in the Richmond and Lynchburg areas. He co-founded and worked to develop the foremost youth soccer club in Central Virginia. He was head coach of the men's varsity soccer team at the University of Richmond, coached E. C. Glass High School to its first Western District soccer title, and coached dozens of travel teams from the Hill City United and Lynchburg United Soccer Clubs.

Randy received the following honors for his professional and community activities:

Since his election to City Council, Randy has Chaired the City's Finance Committee, co-chaired the college/university Town And Gown Committee, and served as City Council's liaison representative on the Lynchburg Parking Authority.

Randy is Vice Chair of the Board of Governors of the Virginia State Bar's General Practice Section.  He is also the Public Trustee representing the State of Virginia on the Board of Trustees of the Southern Association of Colleges and Schools Commission on Colleges (SACSCOC).